Providing electronic equipment with an accurate sense of time has always been an interesting challenge - more than one company dedicates its existence to this job. NXP, being the successor of Philip Semiconductor, continues the Dutch real-time counter expertise.

With the PCF85063TP, they offer a low-power part dedicated to timekeeping in both space and power constrained environments such as Wearables and similar products. From a technical point of view, the PCF85063TP is not particularly difficult. Figure 1 shows its internal block diagram consisting of the clock system and the I2C interface which the part uses to get in touch with you microcontroller or process computer. 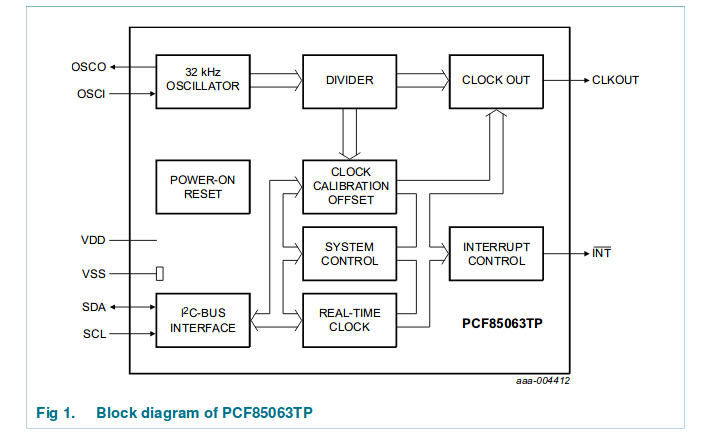 The PCF85063TP is a classic timekeeping IC

One interesting aspect of the design is the lack of a backup power circuit. The part is not intended to work as a full-blown calendar chip similar to the ones produced by Dallas and used in PCs - instead, the part works only while power is provided from the host system.
When actually working, the behaviour of the part - by and large - matches that seen in other NXP real-time clocks. Figure 2 shows the register layout, which should be well known to all those of you experienced with other real-time clock chips.

As mentioned in the introduction, the PCF85063TP stands out from other parts due to its low power consumption and low physical size. NXP managed to fit the entire electronics in an HWSON8 housing, which leads to physical dimensions of just 2 x 3 x 0.75 mm.

Nevertheless, and exp managed to fit in two very neat features. First of all, the part can output a clock signal to feed other parts. Secondarily, the actual power consumption is very very low - when fed with 3.3 V at the ambient temperature of 25°C, NXP claims that the normal standby current is in the range of but 0.22uA.