Around 2010, ON Semiconductor introduced the world to the CAT4101 family of LED drivers. Sadly, the sands of time leave no one untouched – which is why we must channel Steve Jobs while mourning the death of our beloved friend, CAT4101TV-T75.

As shown in the figure, the CAT4101 was a relatively simple constant current shunt regulator. This meant that its efficiency was limited, but that no inductors were needed – without switching action, there are no LED bulb EMI concerns to worry about.

Using the part to drive a set of LEDs could not be easier. Our figure shows an example where a set of LEDs is driven by a CAT4101TV-T75 with a guaranteed current of 1A. The main issue is that a regulated 5V supply is needed to power the logic, while a second supply with higher voltage is required to actually keep the LEDs happy. The resistor shown on the right-hand side, then, is used to determine the LED current desired. 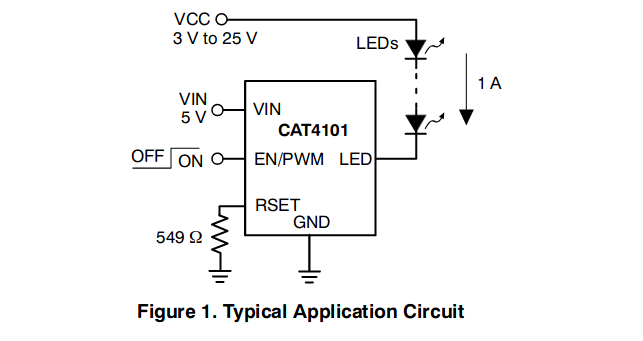 Driving LEDs with constant current is not difficult

ON Semiconductor apparently planned to offer an entire product line for LED driving; its life, sadly, seems to have been cut short. Thus, no in-house replacement will be provided for the end-of-life CAT4101 – other vendors do, however, offer similar components.

While the part is no longer being produced by ON Semiconductor, there still is quite a bit of stock to be had. Use OEMSecrets to find CAT4101TV distributors, and stock up in a last-time-buying frenzy to keep units in the field!