While Microchip definitely is known for its PIC microcontrollers, the company also produces various sensors and even a WiFi module. These components are now advertised as a cloud-ready package for the Internet of things.

From a technical point of view, the AC164164 combines a PIC microcontroller, a WiFi module and sensors. Figure one provides an overview of the top of the evaluation board. The PCB also has a mikroBUS socket – it can be used to plug in the various sensor modules developed by MikroElektronika. 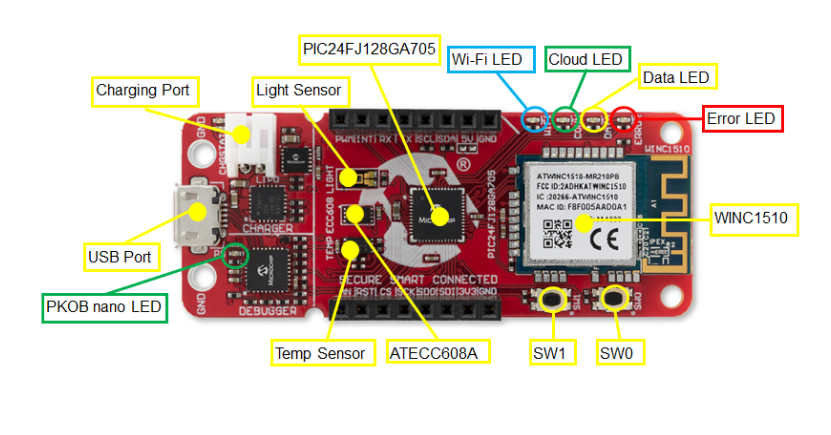 While Microchip advertised Amazon AWS for the AVR-based evaluation board, the AC164164 is configured to connect to Googles cloud services by default. Connect the module to your PC, and open the demo application to set up a WiFi connection – the preinstalled demo system will then proceed to streaming data to a Microchip-registered web site hosted on Google Cloud.

Actual software development is done using Microchip’s MPLAB development environment – old timers should not fret, as the AC164164’s main processor is supported by a pretty decent free compiler for the C programming language.

Hardware initialization usually is not done by hand. An AC164164 code generator is available as part of MCC – simply add the various peripherals you are interested in, and let Microchip’s IDE take care of generating the drivers for you.

Microchip is known for allowing its evaluation kits to be used as plug-in modules. The AC164164 is no exception in this regard – thanks to its low price of less than 30USD, small-series sensor applications might be better served by simply deploying the evaluation kit instead of an Arduino or another microcontroller.