Parts like the FM25V20A use ferromagnetic random access memory technology: think of it as a new kind of RAM using a ferromagnetic layer for data storage. The idea has been around for more than thirty years, which makes the FM25V20A’s appearance in our search trends all the more fascinating.

Either way, Cypress promises a high endurance of 100 trillion (10^14) read/writes, along with a 151-year data retention – as with normal DRAM, write cycles can be done at full bus speed without any delays or similar wait states. Furthermore, no paging needs to be observed – each of the 256 K × 8 cells can be adressed in a peace-meal fashion.

SPI flash is an old classic – it is only natural that Cypress decided to deploy its FRAM technology in this market. Figure one shows the block diagram of a FM25V20A – experienced chip designers should immediately recognize the SPI transciever needed for communication with the memory array. 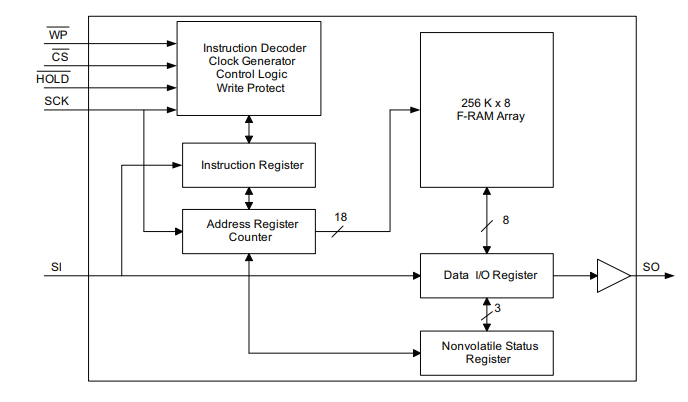 The SPI transciever lets periphery communicate with the FRAM array

Cypress adds two custom pins to the normal SPI layout. First of all, HOLD forces a temporary shutdown of the logic – when set, transitions of the SCK pin are ignored. This feature lets you “kill” the memory if the CPU needs to handle another, more urgent task. Interesting aspect number two is a pin dedicated to write protection – if it is activated, data on the FM25V20A is write protected as if it were in a normal ROM cell.

In terms of SPI modes, the FM25V20A supports both SPI Mode 0 and SPI Mode 3. The maximum bus speed of the FM25V20A is 40 MhZ, no wait states are required due to the ferromagnetic structure.
FRAM’s power consumption is quite humane. The part can live with 2.0 to 3.6 Volts of inpout, and needs at worst 3mA when working at 40MhZ. If your system can make do with a serial clock of just 1 MhZ, a maximal current consumption of 0.30mA is stated.

FM25V20A-G comes in a SOIC housing, while the FM25V20A ships in a DFN case. Both parts are qualified over the industrial temperature range – the only problem is the quite exorbitantly high price.